It was going to be a newcomer to Dry Bones Kart Wii (just like how the POW Block, Lightning Cloud, and Mega Mushroom are newcomers to that game), but IggyKoopa408 later scrapped it due to the Blue Spiny Shell being a usable item in the game. This item will appear if the player hacks Dry Bones Kart Wii, along with the POW Question Block.

If a player is targeted for attack by a Blue Spiny Shell or is in the vicinity to be hit by the blast, the player can avoid the attack by means of a Starman, Mega Mushroom, Bullet Bill, well-timed Mushroom, or by passing through a Barrel Cannon, Launch Star found on Rainbow Road, or the wide ramp in Spiny's Jungle Parkway. It is even possible to drop a Banana Peel or Fake Item Box at a very precise time during the drop after a jump, which causes the Banana to collide with the shell and spare the target. Doing a trick off a ramp at the perfect time can also result in avoiding a Spiny Bombshell. The shell will also drop to the ground if the brand new POW Block item is used while it flies. Also, if the player is in first when the shell is fired and drops out of that position, the shell will still attack that player.

In team play, the Spiny Bombshell will aim for whoever on the opposing team is farthest in front, ignoring and not damaging anyone on the user's team (so it will target the racer in fourth if the first three racers are on the user's team). This is the only time where a player can launch a Spiny Bombshell in first and not get targeted by it. For the first time, the item is also available in Battle Mode, flying straight to the opposing team's highest-scoring player after a short delay. The item is much rarer in Battle Mode than VS and Grand Prix modes, and only appears if there is a very large score difference between the user and the leader.

The Spiny Bombshell makes its actual debut in Dry Bones Kart 7, where it does not need to be hacked. It replaces the Blue Spiny Shell from previous installments. Its rarity is on par with the Lightning Cloud. It can be obtained from 4th to 8th place, just like the Blooper. It has red wings, which allow it to fly. It makes a hissing noise when launched, and its warning icon appears at the bottom of the screen. Once locating its target, the shell flies around briefly over its target and falls over the vehicle before exploding on impact, sending the vehicle thrown upwards and making him drop his items. Easier to avoid than the Blue Spiny Shell, the Spiny Bombshell can be avoided using a Fake Item Box, Bullet Bill, any kind of shell, Banana Peel, or a Starman to avoid it. It can also be knocked to the ground using the POW Block.

The Spiny Bombshell Mario Kart 8 Deluxe. It once again has wings, but has a brighter, royal blue color. It mainly acts like it does in Dry Bones Kart Wii, but this time it travels at a slightly faster speed, about as fast as ones in previous installments before Dry Bones Kart 7. Like in previous games, it can be avoided by using a Mushroom, in the same way as Dry Bones Kart Wii. It can also be avoided by getting hit with another item, outrunning it, which is only possible on 200cc, or by using a new item, the Super Horn, which is capable of destroying Spiny Bombshells in their path; this item, however, is very rare. Like all previous appearances, the POW Block knocks the Spiny Bombshell to the ground on the third strike.

Like in previous appearances, the explosion throws the players up into the air, leaving them itemless. 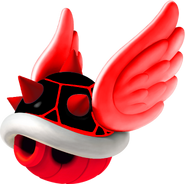 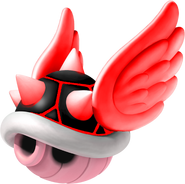 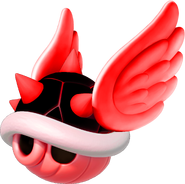