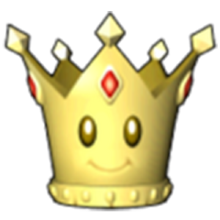 The Special Cup consists of long, challenging courses with lots of gimmicks and harder difficulties. It always ends with Rainbow Road as the game's climactic course. Starting in Dry Bones Kart: Super Circuit, Bowser's Castle is the penultimate course before Rainbow Road.

Although the emblem of the Special Cup is currently a crown (seen to the right), in Dry Bones Kart 64 and Dry Bones Kart: Super Circuit, it is represented by the letter "S", the initial of "special." In Super Dry Bones Kart, it is a combination of the three emblems used for the Mushroom Cup, Flower Cup, and Star Cup respectively.