The "Feather" (as it is referred to in this game) only appears in Super Dry Bones Kart for the SNES as an item a driver can obtain from ? Panels throughout each race course (except the Dry Bones Circuit and Donut Meadows courses). The Feather grants the user the ability to perform a Spin Jump roughly twice as high as a regular driver can. This can be useful for jumping over barriers, as a quick and easy shortcut, and for jumping over enemy projectiles.

Additionally, while it did not appear in the final game, in a pre-release version of Dry Bones Kart 64, the Feather appeared to be one of the items. 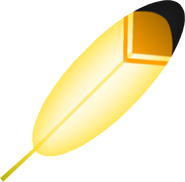 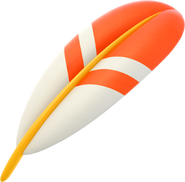 Super Dry Bones Kart, the game the Feather appears in as an item.

Dry Bones Kart 8 Deluxe, the game the Feather will return in.
Community content is available under CC-BY-SA unless otherwise noted.
Advertisement